Get a FREE assessment of your rental property. Start here!

Get a FREE assessment of your rental property. Start here!

The growing city of Norman, Oklahoma is home to numerous sporting events as well as some famous people.  Norman has been home to The Today Show’s Hoda Kotb and Norman is the birthplace of actor James Garner. Garner was the famous TV star Bret Maverick. A statue featuring Maverick (Garner) was unveiled April 2006 in Downtown Norman.

Actor Ed Harris that played in Apollo 13 holds a degree from Oklahoma University and called Norman his home for awhile. Country singer Conway Twitty also lived in Norman at one point. The famous country singer Toby Keith calls Norman his home and also owns one of the best eateries in town called Toby’s American Grill. A sure place to stop and eat if traveling through.

Norman, Oklahoma, is in Cleveland county and is approximately 17 miles South of Oklahoma City, Oklahoma. The city is in the Oklahoma City area.

If you like football, Norman is home to the Oklahoma University Sooners and a great University to attend! 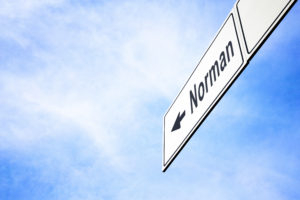 If you are seeking a rental home in Norman, Oklahoma – you take a look at what Real Property Management Enterprises has to offer. Simply visit www.Enterprisesrpm.com and go into our Search Rentals page. You can always call our office at (405) 463-0040 and inquire as well about our Norman, OK properties and what might be coning available.

If you are a Norman, OK property owner and need a Norman, Oklahoma Property Management company, you have come to the right place. We are knowledgeable of the Norman area and would love to be able to visit with you about your property management needs. We are here to help you and make your life easier.

The staff at RPM Enterprises has been wonderful to work with! They handled all my needs for leasing my Norman property! Won’t be going anywhere else!

Please fill out this form and we will direct your message to the appropriate person.